The  body is more than just a collection of functioning parts. Since everything  generates a frequency, the body and its organs have their own energy field  which is continually changing. All conditions of disease are rooted in this  energy system. If our “life force” is low or blocked, we are more  likely to get sick. But if it is high and flowing freely, we can maintain our health  and well being. Reiki Healing Energy provides means to balance the human energy  fields (Auras) and energy centers (Chakras) to create conditions needed for the body’s healing system to function,  therefore, we have deemed it necessary to study the Chakra System more in  detail.  Chakras are energy  centers, actual vortices of force existing in the etheric bodies of human  beings, which correspond to different levels of consciousness, and control the  physical condition of the area of the body which they influence.

When the flow of energy  becomes stagnant or blocked within these centers an imbalance is created in  which we are not aligned as body, mind, and spirit and we become ill in some  form. Reiki can clean and rebalance chakras  very effectively. Even non-Reiki  people instinctively cover their chakras if there is too much energy going into  them, i.e., often we will clamp a hand on our stomach in response to  emotional shock, on our chest from fright, or on our solar plexus when being verbally bullied.

We have seven major chakras, which are represented in the diagram  below, and over 100 minor chakras in our bodies. On the etheric level, each of  the seven main chakras corresponds to one of the endocrine glands and major  nerve plexus.  The chakras absorb the  universal energy, break it up into component parts and then send it along  energy rivers, called nadis, to the nervous system, the endocrine glands and  then the blood to nourish the body. 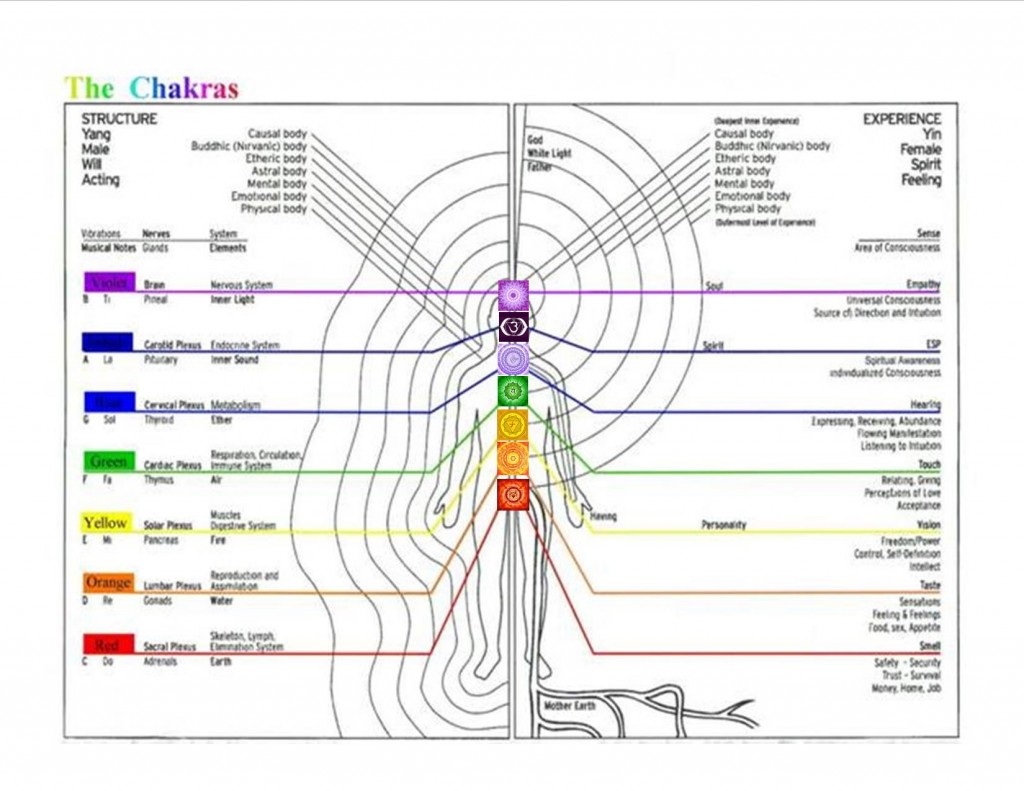 THE ROOT CHAKRA, the first  and lowest of the seven chakra centers and is located at the base of the spinal  column.  Its endocrine correspondents are the adrenal glands. It governs the  spinal column and kidneys. This center is described as the point of transition  of spirit entering the physical body. It deals with the area of survival. Often  there are seen issues involving faith, trust, and abundant living within this  chakra.

THE SACRAL OR EMOTIONAL  CENTER, the second chakra, is situated at the root of the genitals.  Its endocrine correspondents are the gonads. It governs the reproductive  system. Spirit is drawn into form within this center, as in pregnancy. It is  the center which deals with creativity, sexuality and sharing, early  infant/child- hood issues, parents and parenting.

THE SOLAR PLEXUS, the  third chakra, is below the sternum. The  endocrine gland is the pancreas. It  governs the stomach, liver, gall bladder and nervous system. This is the place  of ego consciousness. How you relate to others without giving away your own  power. A mature ego becomes the base of the heart, which trusts and allows the  heart to open.

THE HEART CHAKRA, the  fourth chakra is in your chest. The endocrine gland is the pancreas. It governs  the stomach, liver, gall bladder and nervous system. This center governs the  heart, blood, and circulatory system. Unconditional love is the energy which  needs to be felt and communicated through this center. The form that love takes  in our lives is reflective of the flow in this center. This chakra is also the  bridge between the lower three and upper three chakras. It is within the heart  that our sense of “beyond self” exists where heaven and earth can meet in each  of us.

THROAT CHAKRA, the  fifth chakra, is at the base of the throat. The endocrine gland related to it  is the thyroid gland. It governs the lungs, bronchial and vocal apparatus and  the alimentary canal. It is involved with areas of communication, both sending  and receiving. Sometimes this chakra holds anger from not expressing one’s  truth. How and what we communicate is an important part of our individuality  and purpose.

THIRD EYE,  the sixth chakra, is slightly above the area between your eyebrows. The endocrine gland is the pituitary. This center has  been called the “seat of the mind” and governs the lower brain, left eye, ears,  nose, and nervous system.  This chakra  has to do with vision; it provides the ability to look beyond circumstances, to  blend reason and intuition, left brain/right brain, mind and spirit. This is the  center of self mastery, expanded consciousness, visions ideas and ideals,  inspiration and higher thinking.

CROWN CHAKRA, the seventh chakra, is at the top  of the head, the pineal gland is the physical endocrine gland. This center  governs the upper brain, right eye. This is the point where transcending of the  physical is possible, the point of conscious consciousness, the unity of all  things (pure God Consciousness). This center has been described as the corridor  through which the body moves beyond, and through which the energies of true  healing and inner guidance is drawn. Openness to this energy will strip away  from life that which is not necessary